Scotland’s History and the Yew

Living for over 1,000 years, Scotland’s most ancient yews are witnesses to the birth and growth of the nation.

From St Columba to Robert the Bruce to the Scottish Parliament today, yew trees have played an important and meaningful role in the history, culture, myth and legends of Scotland.

The deep rooted significance of the yew in Scottish history is not widely known and much less appreciated. Visitors from around the globe come to see the world famous ancient and exceptional yew at Fortingall in Perthshire, yet many other significant yews entwined in Scottish history do not receive the same recognition and protection. Many remain at risk, especially from land development.

Yews are known to have featured prominently in the lives of:

St Columba, who created personal ‘cells’ at ancient yew sites for prayer and meditation and also preached  under  yews.

William Wallace is associated with a yew at Elderslie in Lanarkshire, which some claim he played under when a child.

Robert the Bruce took shelter with his men under the yew at Stuc an t’Iobhairt, Loch Lomond in the early days of his campaign to free Scotland which is still there.

Mary Queen of Scots had special coins minted featuring the yew at Crookston Castle (now lost) under which Lord Darnley proposed to her.

Lord Morton’s plot to kill Lord Darnley was allegedly hatched under the great yew at Whittinghame which is still there.

John Knox and Bishop Wishart, leaders of the Scottish Reformation are linked to a great yew at Ormiston.

Sir Walter Scott mentions yews in his works and his Abbotsford home features yew as topiary and planted in groves.

The seventh Earl of Wemyss who was the Grandmaster of Scottish Freemasons was buried in a mausoleum at Gosford surrounded by 16 yews in a circular enclosure.

Robert Louis Stevenson played under a yew at Colinton Manse and celebrated it in his poetry.

The princesses Elizabeth and Margaret each planted a yew in 1937 at their childhood home of Glamis Castle. 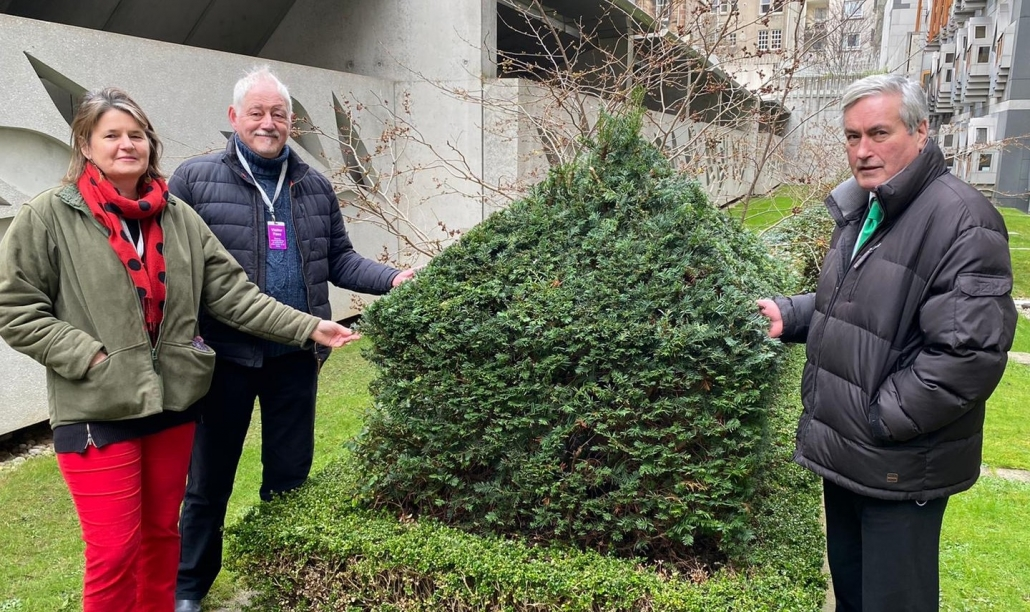 To celebrate the creation of a Scottish Parliament a cutting was taken from William Wallace’s yew and planted in the private garden for MSP’s at Holyrood.

SYTHI visit to the Wallace Yew at the Scottish Parliament, with MSP Iain Gray. (Please click on text to view full article.)

Yews are also connected with clans and noble families in Scotland such as:

The Stewarts – many members of this family had personal yew connections and old and ancient yews are often found on Stewart landholdings e.g. Traquair House.

The Frasers  – the clan badge features a yew and for centuries the clan used to gather in an ancient yew grove above the eastern shore of Loch Ness.

The Setons – the plant badge of the clan is the yew.

The Sinclairs of Rosslyn – an ancient yew stands beside Roslin Castle, above the vaults where it is said Templar treasures were once secreted. A yew stands in the grounds of Rosslyn Chapel and a symbolic representation of the yew in the guise of the Apprentice Pillar is the major feature of the chapel. In recent decades the chapel has been partially enclosed by a yew hedge.

Yews also feature at significant sites sacred to the Knights Templar, Scottish Freemasonry and there are more waiting to be discovered.

For over a millennia the yew has influenced events in Scottish history yet it receives no acknowledgement for its contribution; there are no eulogies for the hundreds of yews – including many ancient trees – which were sacrificed to make longbows for the Scottish forces at Bannockburn, which assisted so crucially in that history making victory.

This is just a brief taste of the yew’s place in Scottish affairs for well over a thousand years. But how much is known to date about Scotland’s yew heritage?

Scotland possesses few recorded yew sites in comparison to England’s 1,855 and Wales’s 427 in the Ancient Yew Group’s database available at www.ancient-yew.org which is the best publicly available archive of yews in the world. At present Scotland’s total is 101, which includes yews of all age categories from 300 to well over 1,000 years old but much of the data is decades old and needs verification. However, to put that in perspective, the oldest yew in Germany at Paterzell is thought to be no more than 500 years old. In other words Germany only possesses one confirmed ancient yew.  Between Germany, Austria and Switzerland only 10 ancient yew sites are recognised. Ireland has 81 recorded sites but no ancient yews are left in Ireland, France does have over 100 sites of mostly ancient yews and Spain has 23. This shows that even what is known of Scotland’s yew heritage recorded and verified so far is of European tree heritage significance.

Why Scotland’s number of recorded sites is comparatively few compared to the rest of mainland Britain is simple to explain. The same levels of attention and voluntary resources applied in identifying potential locations and investigating them is far below that applied in England and Wales in recent decades. There are reasons for this, one being that yews need a large girth in excess of 25ft (7 metres) to be many centuries in age and possibly 1,000 years old.

This is not so at Dryburgh Abbey in the Scottish Borders where a slow growing yew with a 12ft (300 cm) girth is at least 600 years old. At Roslin Castle the yew has a girth of less than 500 cm and evidence suggests may be around 700 years old. At Whittinghame and Ormiston which is also in East Lothian, layering yews with girths of 330 cm and 592 cm respectively are thought to be around 1,000 years old, if not more.  Neither of them are hollowed and Ormiston has yielded a partial ring count of 750 years. Both trees feature in the history of Scotland from over 400 years ago when they were already substantially sized trees, Ormiston being used to preach to crowds sheltered under its boughs. On the exposed and windswept Atlantic peninsula of Ardnamurchan in western Scotland, scoured of soil by glaciers, is where the late yew expert Alan Mitchell (founder of the Tree Register of Britain and Ireland) became convinced that small stunted bushes of slow growing yews could be over 1,000 years old.

The most obvious location to search for old yews is well known – in currently used and abandoned churchyards of any Christian religious persuasion – Celtic, Catholic and Protestant. However, yews are also found in burial grounds with no church or chapel, monastery and abbey sites, particularly once held by Cistercian monks, at castles, old tower houses, mansions, on country estates, in private hotel gardens, beside cottages and farmhouses as well as being salted away in modern plantations and ancient woodlands. In fact, of the known sites in Scotland recorded so far and unlike the scenario in England and Wales, most are not in churchyards or other religious sites.

It may seem rather insignificant to record yews in Scotland a ‘mere’ couple of centuries old, but a 300 year old yew is not old in the scheme of things. Whilst mighty trees like beech usually live to no more than around 300 years of age, at a similar stage in life a yew is still in a juvenile phase, yet to reach maturity which is usually begins around 400 years of age. Often a yew begins to hollow at this time and may take another 400 years or more to complete the process.

Recording and protecting Scotland’s juvenile yews means that in time the yew heritage of Scotland will have more ancient yews, becoming more priceless a tree heritage in the process, and for the benefit of future generations to wonder about and marvel at.

Images are available for sale. Please contact us at [email protected]